There are some web trends that we choose not to speak of; especially when they take you back to an era when the rules of web design and etiquette were yet to be created. We refer to this time as the 90s.

Captain Marvel, set in the 90s, appears in cinemas all around us today (International Women’s Day) and the hero (played by the Oscar-winning Brie Larson) is set to kick a lot of alien butts.

The film itself isn’t the only thing kicking butt. Marvels creation of their website and content leading up to the release of Captain Marvel is a true throwback to the 90s and trust us, it’s a good’un! 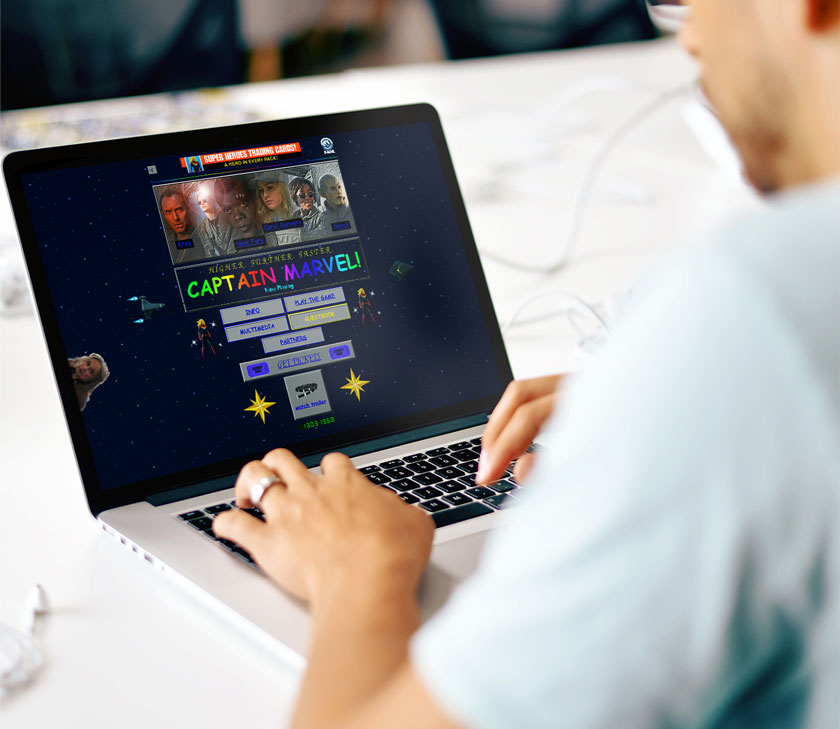 At first glance, the Captain Marvel website page looks like it’s a thrown together for a 90s high school project but the sheer thought and creativity behind it is a Digital Marketing masterpiece.

When Marvel drops little gems like this, we can’t help but appreciate it. When you think about how long ago the 90s were (depending on how old you are) it’s easy to see how far web trends have come over the past two decades.

The recent rise of different devices and tablets welcomes the technological advances we all use in day to day life and there is nothing like seeing a 90’s website in action that lets us know how things have changed. 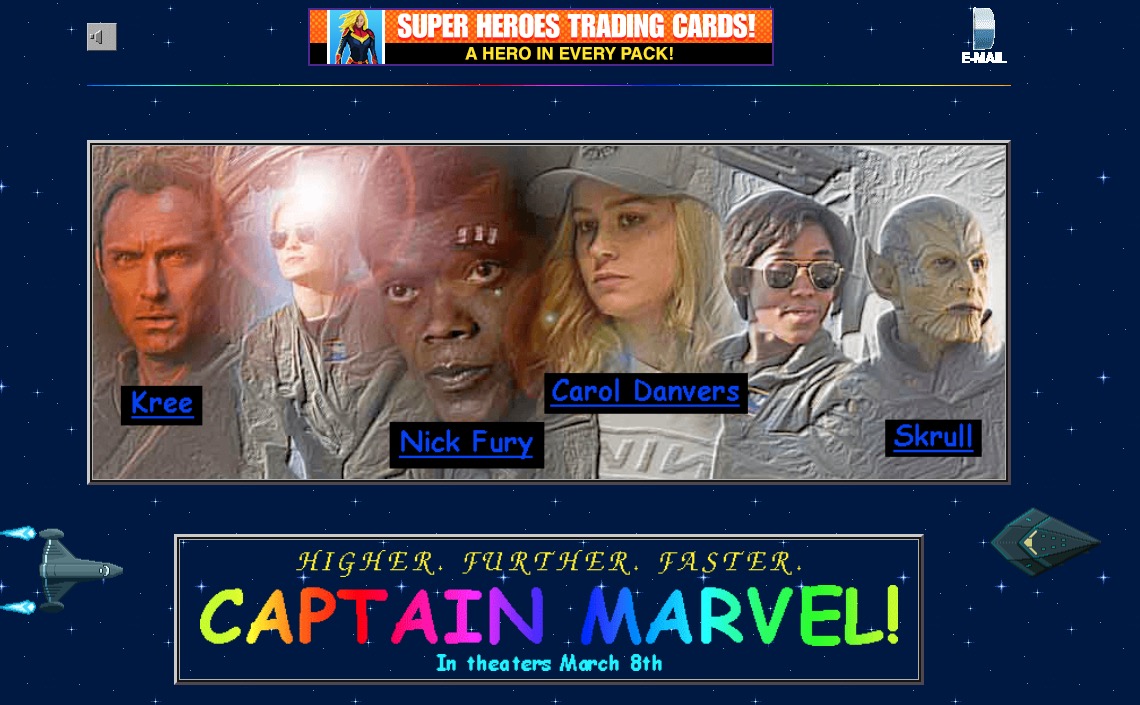 The internet in the 90s often felt like one giant chatroom. You’d be welcomed by a huge bold title (exclamation mark necessary, of course) and it makes sense in a time where Google and Search engines were not popular.

If the blatant use of word-art doesn’t smell of the 90s, you should pay attention to the intentionally placed images and graphics; it’s safe to say that nostalgia is in full force.

The release of Captain Marvels trailers were enough to entice fans and deepen the whole 90s vibe. This film is set to be a knockout.

Their website even has a game where you “spot the Skrull.” This is a simple yet fun user interface and we’re loving it. We scored 7, can you get higher? 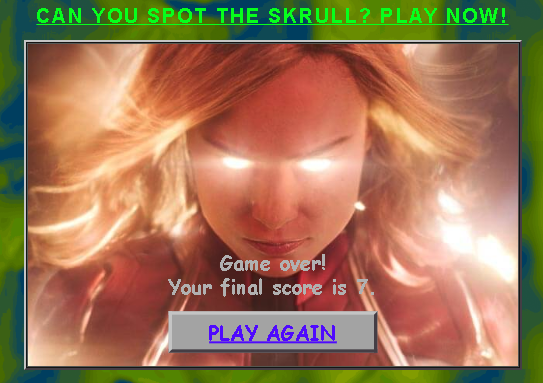 The metric of success for all websites in the 90s appears to be based on whether you could somehow get a GIF onto your web page. Now, before we delve into this a little further, let us make sure you know we aren’t referring to GIFs as we know them today. We’re talking about 90s GIFS which back then meant making an object move, flash or if you really want to blow peoples minds then making something disappear and then reappear again. Notice how the old lady keeps popping up on the website? Marvel have smashed it, literally.

Comic Sans is back

Before Google Analytics became so popular by monitoring everything a website does, the websites created in the 90s had to find other ways of letting visitors know how popular their site was. What better way to do that than through hit counters. Animated hit counters, hit counters that flash or even hit counters in comic sans; the beloved font of the 90s that’s plastered all over this Marvel page. 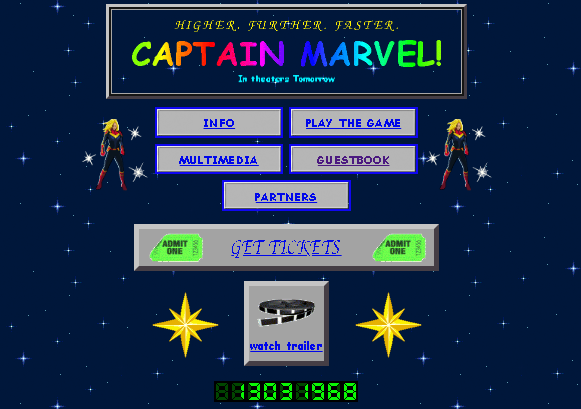 Now this one doesn’t actually count so I think Marvel might need to work on their GIFS a little better. Marvel being as big as it is, their brand and franchise is well-known all over the world so don’t be fooled when you see their guestbook. This isn’t an attempt to build the MCU community. Back in the 90s, sites used to use guestbooks as a way of capturing cookies. In today’s website activity, you’re signing that guest book whether you like it not.

One thing we can all appreciate is the frustration of landing on a website and the page not loading within 0.00001 seconds. The intentional imagery used on the Marvel website is a common sight that we were all used to seeing in the 90s. Good job for increasing page loading speeds.

Why have Marvel paid homage to the 90s?

Long before Steve Rogers defrosted or the prodigy of a mechanical engineering genius Tony Stark built his iron empire, there was Captain Marvel.

As if seeing the blockbuster store wasn’t enough of a trip down memory lane (A perfect example of brand recognition), but Captain Marvel, set in the 1990’s is full of nostalgia from Samuel L. Jackson’s Jules Winfield inflected Nick Fury look to Carol’s Guns ‘N’ Roses t-shirt.

Captain Marvels introduction is no mere coincidence, not least because no other MCU hero comes close to matching her strength; not even the Hulk.

If you want to watch the trailer again, Marvel have politely placed it on their website; in no better fashion than a Windows Media Player.

We think it’s safe to say they won’t be showing Captain Marvel on a Windows Media Player but we are super excited for what’s in store when the filmed is released. We are expecting big things from Marvel following the buzz they have created through their marketing.

For a franchise that is as big as Marvel, they have broken into different realms of Marketing by going against the traditional campaign we all predicted and almost expected. The beauty of their website targeting a niche audience who may not completely understand the context behind it yet are able to relate to it has created the perfect anticipation and excitement leading up to the film release.

The best thing about it all is that The Avengers: Endgame is released around a month after Captain Marvel and we’d be lying if we said we aren’t excited to see what Marketing campaign they have in store for us all.


Let's build something together